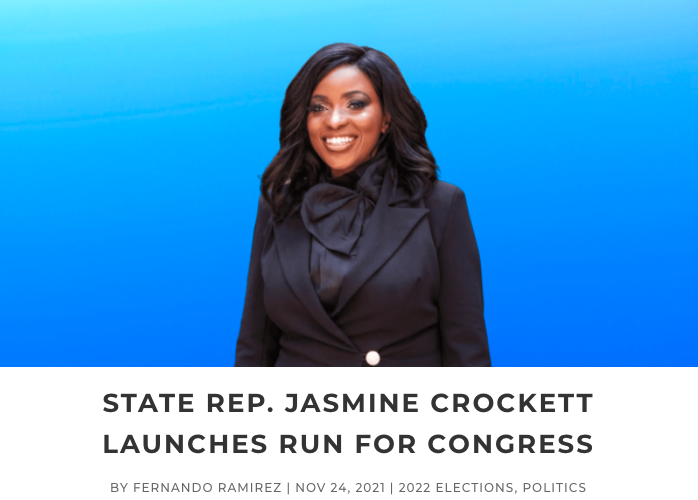 Johnson, a nearly three-decade incumbent of the district, endorsed Crockett on Wednesday.

“I’m here to tell you I’m ready,” Crockett said in a Dallas news conference announcing the bid. “There’s a number of people that will most likely enter this race, there are none that have been battle-tested like I have this session.”

A civil rights attorney elected to the statehouse in 2020, Crockett made her mark in the legislature with her focus on civil rights and criminal justice reform issues, as well as being one of the founding members of the Texas Progressive Caucus.

“We are going to need a strong voice for District 30 in D.C.,” Crockett said. “It’s not time to play, it’s not to take a test and see if this person will work out. It’s time to check people’s records.”

Crockett faces a crowded primary for TX-30 that includes two opponents who have raised more than $100,000 for their respective bids; Jessica Mason, a Navy veteran and progressive Democrat, and Jane Hamilton, a Democratic strategist and former Biden campaign staffer who is exploring a run in the district.

Texas’s 30th congressional district, which spans south Dallas, is the safest Democratic seat in the state.